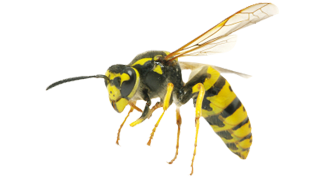 Don’t let yellow jackets cause you problems. Contact our bed bug pest control exterminator servicing your area near Troy, Birmingham, Bloomfield and beyond!

As the name would suggest, yellow jackets are yellow and black in color, although some are black and white. These small wasps measure about 10 to 16 mm in length, with a thin, defined waist and elongated wings that span the length of the body and fold laterally when resting. They are often mistaken for bees.

Yellow jackets typically nest in the ground and create their colonies below porches or steps, at the base of trees, in sidewalk cracks, or around railroad ties. Yellow jackets are not known to nest inside of homes. They have also been known to nest aerially in the wall void of buildings, in bushes, in low-hanging branches, or in the corners of homes and buildings.

What is common yellow jacket behavior?

Yellow jackets are social wasps. They live in underground colonies that may grow to thousands of insects at a time. Their diet consists of beetle grubs, flies, and other harmful pests, which is beneficial to the ecosystem, but they are also known as scavengers that enjoy meat, fish, and sugars and are a nuisance when found around trash cans.

What are signs of a yellow jacket problem?

The best indication of a yellow jacket problem is actually seeing the workers themselves. You may also be able to see the nest, especially when it is an aerial nest.

How do I get rid of yellow jackets?

Yellow jackets are pollinators that eat many harmful insects, so you do not need to take any action unless there is a stinging risk for people or pets. To prevent yellow jackets from nesting, it is beneficial to keep all trash cans closed and clean so that yellow jackets cannot scavenge for food inside or outside of the can. You can also purchase specialized yellow jacket traps; however, due to the fact that there can be thousands of these pests inside of a single colony, that may be ineffective for larger infestations. It is recommended that you call a pest control professional to solve this problem.

The first step in exterminating yellow jackets is to locate the nest, which is fairly simple when it is an aerial nest but a little more difficult when the nest is located underground. After the yellow jacket nest is located, the problem can be solved in a variety of ways. For aerial nests built in a structure such as a building void, it is imperative that the entrance is not sealed until all of the yellow jackets are dead. Typically, this extermination is done at night when most of the yellow jackets are inside of the nest. The pest control professional will spray a dust or an aerosol product in and around the nest to kill the wasps. Once these wasps are dead, it is safe to remove the nest. It is imperative to not close the entrance of the nests built in building voids because the yellow jackets will try to escape the nest by getting into the building, causing a stinging hazard for everybody inside of the structure.

Whether you own a restaurant, office building, or a property manager, we got your business covered!

Once all of the yellow jackets are dead, the nest can be removed. Underground nests are a little less tricky. Since most yellow jackets are out hunting for prey during the day, an insecticide dust is used during this time on the below-ground part of the nest and to the nest entrance. By the time these pests return, the nest will be sprayed and upon contact with these products, they will die. Call us today to exterminate your yellow jacket problem, or request your free inspection! Learn more about bed bugs and the identification of bed bug bites.